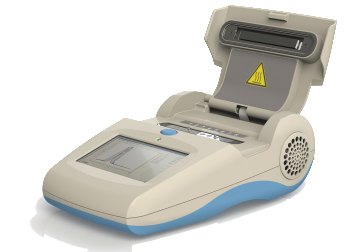 Genie III is now available to order. This instrument has been specifically developed for outdoor use with weather-proofing and portability the primary design objectives. This smaller “hand-held” device only has a single heating block, taking the same 8-microtube strip developed for Genie II. Just like its big brother Genie II, Genie III also incorporates a rechargeable Lithium-Polymer battery that can support operation for a complete day.

Unlike the single channel fluorescence measurement arrangement in Genie II, Genie III has a two-colour fluorescence excitation and detection system. It also boasts wireless communications in the form of Bluetooth and WiFi that can be used for data communications and to support wireless peripherals such as a printer or barcode wand. Genie III also features satellite positioning via an integrated GPS receiver.